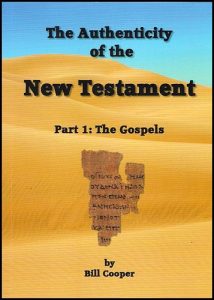 The critics say they were written after the destruction of Jerusalem in AD 70, beyond the lifetime of eyewitnesses, and the author addresses this in the opening chapters. He points out that parts of six New Testament books including Mark were found among the Dead Sea Scrolls, sealed in caves before the place was overrun by the Romans in AD 68. None of the NT books contains any reference to the fall of Jerusalem, so they evidently predate that event. The name of the town of Paneas was changed in AD 14 to Caesarea Philippi, but was named Neronias in AD 61. Subsequently it reverted to Paneas (today spelt Banias). Since both Matthew and Mark call it Caesarea Philippi, both must have written their Gospels before AD 61, well within the eyewitness period. Later chapters are devoted to interesting details confirming the authenticity of the four individual Gospels. A couple of chapters are concerned with the mathematical structure of passages such as the last twelve verses of Mark that are omitted from many modern versions of the English Bible. Related to this are facts regarding the Codices Sinaiticus, Alexandrinus and Vaticanus, and the Greek version of Scripture published by Westcott and Hort.

This fascinating vindication of the truth of Scripture is carefully referenced and carries a bibliography. It is easy to read with its flashes of wry wit. Christians will be thrilled that even in seemingly insignificant details Dr Cooper has unearthed confirmatory evidence of the accuracy of the Gospels. Matthew is seen as having been trained as a government official in the art of rapid note-taking. Examples of shorthand dictation have survived the years. The Sermon on the Mount is not a collection of half-remembered sayings but the literal words of the Son of God.

Next: New Book Added! – The Authenticity of the Book of Esther