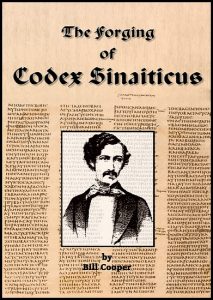 The Forging of Codex Sinaiticus by Dr Bill Cooper – Next only to the King James Bible, Codex Sinaiticus is by now perhaps the most famous (many would say infamous) book in the world. Its impact when it surfaced in the mid 19th century was immediate, and even today is powerfully felt in the world of Bible scholarship. That is because it is pretended to represent a version of our Bible which is quite unlike the Received Text, and is trumpeted abroad as representing the original text of the Bible before the Protestant church and its bishops got their political hands on it, changing it into the Bible that we know today.

It is also wrongly claimed to be the oldest and the best manuscript of the Bible, representing a text to which all others – especially the Received Text – are to be referred. In other words, whenever Sinaiticus differs from the Received Text – which is shockingly often – then its readings are to be held superior to all others and preferred before them all. The impact of this upon Christian doctrine, and especially upon the question of the Bible’s integrity and Authority, has been immense, and it continues to shipwreck the faith of millions.

So, where did this strange book come from? Who wrote it, and why? Under what circumstances did they write it? These are all questions which we hope to answer in this examination of the subject. Until very recently, the task had been insurmountable.